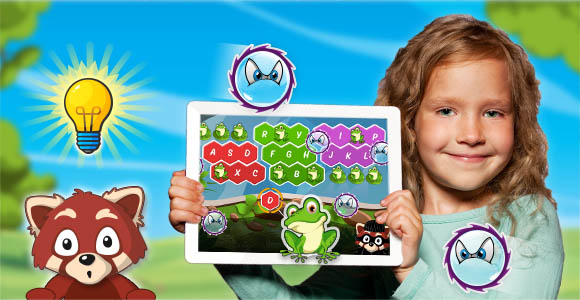 Triple your typing speed by using just one finger. JKL is the purple block on the right. Start keyboarding by using a mouse or a touchscreen. Really? Yes! These are some of our new and different ideas to teach typing. Not to brag, but the results have been phenomenal. Want to learn more? Keep on reading then.

Typing courses have traditionally jumped directly to all ten fingers in the game from the very beginning, and they essentially make you copy words and sentences until you memorize all the 30 alphabetical keys. That’s one way to do it, but it’s frustrating, and it takes an enormous effort to get going. We wanted to challenge this traditional thinking because there just has to be a better way to kickstart your typing.

So we set ourselves on a mission to make kids love typing, and that journey took us into real classrooms, listening and watching teachers and kids while they were practicing to use keyboards. Here are just three (plus one) of the many, inspiring ideas we brought back from those classrooms and which our brand new TypeTastic typing games are built on.

While in the classrooms, we immediately noticed that kids’ shorter fingers, developing motor skills, and narrow eye-span made it hard for them to use multiple fingers for typing. We realized that it would be much easier first to take on the keyboard with just one finger.

So we created beginner exercises for one finger typing, and guess what happened? The kids caught on typing much easier and quickly moved on from hunt-and-peck to triple their typing speed – with just a single finger. How amazing is that?

It gets even better. Now that the kids already knew their way around the keyboard, it was super easy to take the rest of the fingers along with our Keyboarding Kickstart course.

During our observations, it also became clear that young kids see the keyboard differently from adults. To them, the keyboard is letters and characters in a random order, with no real logic to it. So we realized that instead of teaching almost 30 alphabetical keys individually, it would be a lot easier and faster if the letters were in logical groups. Take J for example – you remember seeing it somewhere but don’t quite remember where. But wait a minute! Didn’t J belong together with K and L? In that purple ‘JKL’ group located on the right side? There you go!

So we came up with a unique TypeTastic keyboard visualization that splits all the letters together into nine, color-coded groups. It also doubles as a game board in many of our games. This enables the kids to see the keyboard like a map, and it will be much easier and more fun to find their way around.

The third observation was that whenever the students got to practice typing by playing a game, their motivation shot through the roof.  Even the kids sitting next to them were curious to see what was going on. So to maximize motivation and accelerate learning, gaming was an obvious way to go.

And it works. Kids immediately build a positive, rewarding, and encouraging relationship for typing through playing games. To smooth the path, we even made the first introductory games playable with a mouse or touch screen gestures! Overall, game-based, colorful, and cute approach keeps students engaged and interested for surprisingly long periods, and their learning is unbelievably fast.

Plus One: Make it easier than ever

As a result, the kids’ typing speed improves tremendously in a just few, short hours of practicing. On top of that, there’s no installing, updating or plugs needed. You’ll just sit back and enjoy the smiles on their faces when they practice, so it’s easier than ever before. You’ll be surprised! 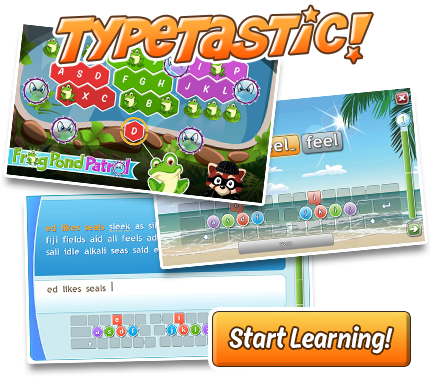 Turn Typing into an Adventure

Are you ready to set your students into a thrilling typing adventure? Look no further, go to TypeTastic! Free Activities and discover all 700+ typing activities free to learn. Need more? TypeTastic School Edition features Teacher Dashboard for student management and setting up target scores. Read more